Roger van der Veken is a sound artist & designer, field recordist and musician from the Netherlands.
His specialty is creating sounds,  soundscapes and nature recordings. He also works on sound art projects, in highly varying setups. Often he makes use of contact microphones and hydrophones to create exciting and surprising sounds.

His soundscapes have been presented in several exhibitions and art festivals. He also gives live performances, solo or or together with other artists.
A selection of his work is available online for streaming and download.

Beats 'n Bits, a musical composition containing three tracks, that are entirely made of sound bites coming from several field recordings. The tracks can be played separately, or can be combined in a loop.

The composition was presented at the Art&Culture trail Midden Walcheren, and received many positive reactions.

Dancing bricks, a sound and video art production made in cooperation with Dutch video artist Jaap Verseput.
The video has been used used for several occasions, as in this live performance of Kaviaar playing an improvisation on the brick sounds.

The recording was made with a hydrophone and multiple underwater cams.
A full length version of the soundscape is also available for streaming and download on Bandcamp

Underwaterfantasy, an underwater fantasy sound trip. First floating on the surface of the ocean, then slowly sinking into the deep, where strange creatures are passing by. Then rising up again to the surface.

This soundscape has been built up entirely from field recordings and has been presented at several art festivals. At some as a soundscape only listening experience, at others integrated in art installations, f.e. in a dome.

The sound of Couscous, an impression of a sound table  that is used in live performances. One of the used objects is a plexiglass plate equipped with some contact mics, which makes it a kind of amplifier for all kinds of tiny materials, like couscous.

All performances with this table are improvisations. These can be solo, but also in combination with other artists. It even gives the audience the opportunity to participate in creating sounds, which is something especially kids love to do.

Windorgan at Vlissingen boulevard, a field recording for which 7 microphones have been used at several spots and mixed into a stereo soundscape.

The recording was made together with German sound artist Nils Mosh, and used for online publication. 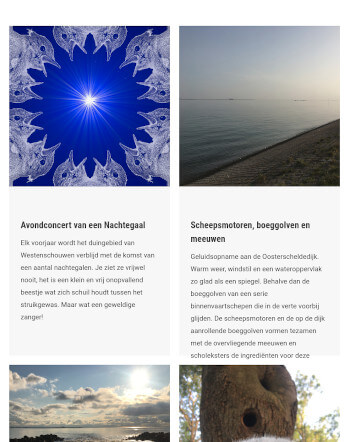 The Sound of Zeeland, an online collection of field recordings and soundscapes that are typical for Zeeland, the province where Roger lives.

You can find this collection on his (dutch) weblog, hetgeluidvanzeeland.nl

Feel free to contact Roger by email or send him a message on one of the social media platforms below.

Check out Rogers profile on Spotify: